Tip-toe through the skull caves 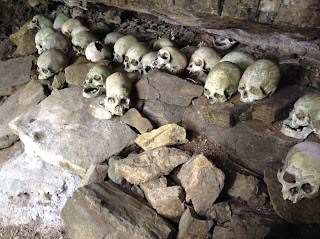 I blame it all on the cannibal skulls.

My fixation with murder, mayhem and mystery must surely have been sparked the moment I first glimpsed those brittle, moudly heads perched below the rocky ledge in deepest, darkest Papua New Guinea.

I was seven or eight years of age. My whole family had clamboured through the thick, dangling foliage for a good hour, sweat flooding our bodies, mosquitoes hovering over uncovered flesh, the sun snapping at us between breaks in the canopy.

Finally, just when I was ready to play the Tired Child card, our local guide called out, "E stap!"

And there they were: 27 skulls of longdead locals. Cannibals, we were told, respected members of their clan. Why else would anyone bother to haul their heads all the way up to this hidden spot?

There was once a second skull cave, one that bore the heads of white missionaries. Or so the rumour went. The cave had only ever been sighted twice before mysteriously vanishing in the forest, never to been seen again.

Had it caved in?
Had the rainforest gobbled it up?
Or perhaps it never really existed, was a myth started to terrify the dim-dims*, to keep us up at night. 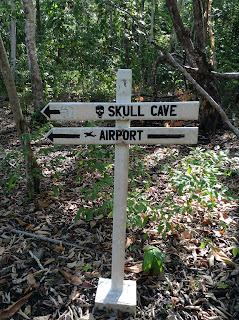 The jury is still out on that one, but from the moment I heard about it, from the second I spotted those skulls, my imagination was awakened, my creativity alive. It's no wonder two of my mystery books have centred around cannibal skull caves— An Island Lost and A Plot To Die For (Ghostwriter Mystery 2). See below.

My journey to the caves

Born and bred in Papua New Guinea (PNG), I was used to local folklore and sinister superstitions. My family often travelled to the eastern tip of the country, to the stunning Milne Bay where we co-owned a deserted island called Doini, an unprofitable copra plantation that had long been deserted by the locals.

Like most of the country, this region is glowing with a colourful past. It is a land where the ancestors of real-life cannibals still live, where missionaries still visit despite being headhunted in numbers, and where witchdoctors are as common as GPs.

On the surface, Doini Island seems like any other idyllic tropical haven—glistening, crystal clear water, clapping palm fronds, friendly local villagers. But I had come to know it as a deeper, darker place, a land of honest-to-God mystery. And that creepy cannibal cave beckoned me each time we visited, never failing to inspire and impress.

And I have visited plenty.

I was just there, last week, on a reunion trip with my entire extended clan - 18 of us in fact. Doini is now an eco-resort, no longer the playground of a few lucky families, but its rough past remains, the cave still firmly settled in the middle of the forest, relatively untouched. Still beckoning visitors in.

And so I trudged there again last week, camera in hand, notebook at the ready. And while the path is so much easier today—thanks to longer legs and a tourist friendly track—the goose bumps still rippled across my body the second the skulls came into view. And I itched to tell another story based on those bones, reimagining their history once again.

If you haven't read my two novels that are set on fictionalised versions of Doini—and this blog has you intrigued—you can catch up with them at Amazon, Apple, Kobo, Nook and elsewhere:

• An Island Lost is the story of a young woman's journey back to a tiny Pacific island where her father once disappeared. It tells of her journey from an organised life in New York city to the chaos of Papua New Guinea, and climaxes at the very spot where my imagination took hold—that extraordinary skull cave.

• A Plot to Die For is the second adventure for Ghostwriter Roxy Parker who is invited to a boutique island resort to write the life story of an extrovert hotelier. When Roxy discovers the hotelier murdered, her head protruding from the sand in a ghastly local ritual, she must swallow her horror to uncover whodunit.

Or perhaps you want to discover the skull cave for yourself? I may elaborate on the journey in a future blog, but for now, check out Doini Island's website and start saving for your fare. It's no quick trip. From Australia, it requires two plane rides, a quick jaunt in the back of a truck, and a bumpy four-hour boat ride, but it's certainly worth the effort: http://www.doiniisland.com/

Otherwise, happy reading everyone, and may your life be filled with adventure and awe. Or, at the very least, a few sights that set your imagination on fire.

*dim-dim: a local Milne Bay nickname for white people
Posted by CALarmer at 21:44