So we got a dog, an Australian cattle dog, a young Blue Heeler we named and renamed for ten frustrating days before settling on Casper (because he has a blizzard-like coat, not because he's an invisible presence, let me assure you of that!) 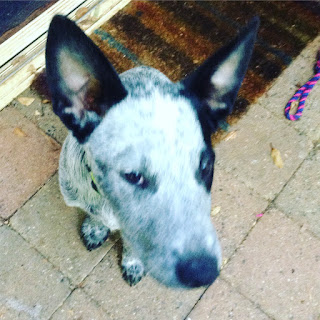 Casper is adorable for all the usual reasons, of course. He's cute (see the evidence, above), cheeky (ditto) and brings the family together, which is no mean feat now we have teenage sons who'd rather be anywhere but, like, together thanks very much.

But there's one other perk of having a pup that I hadn't factored in, but which has already paid dividends, big time.

Casper is my creative muse.
He jolts my imagination into gear.
He makes me want to write another book.
And he does this by taking me for "walkies".
What a good boy!


In case you hadn't noticed, I've been a bit uninspired of late. I've been feeling a little slouchy in the story department. I have a bunch of 'novels' in progress on my hard drive, but nothing that really, well, drives me. Which means the progress has been more Mini Minor than Ferrari 458.

After producing ten novels in relatively quick succession, I'd come to a creative halt. A road bump if you will.

Then, last week, Casper changed all that. Here's how it happened.

For those who don't know, my days are usually spent sitting at my desk in the Byron Bay hinterland, tap, tap, tapping away at freelance work, editing and/or fiction—if I'm lucky. I get up from my seat from time to time, to stretch the limbs, make a cup of tea, ransack the pantry, but, for the most part, I'm stuck on my butt, tap, tap… well, you get the gist.

Now thanks to my feisty canine companion, I'm urged to get vertical more regularly than ever before, and for longer periods of time. And it's not just great for my health and thighs, although it is, in equal measure. It's been like steroids for my leetle grey cells. So much so, the last time Casper and I went for "walkies", I conjured up an entire murder mystery before I even got past the front gate. (Which is actually not as extraordinary as it sounds, I live on seven acres.)

As he pulled me down the road, bursting at the leash, I let my mind gallop along behind him, and gallop it did—straight to a convoluted plot that involves a missing daughter, a shifty family, and an innocent, caught up in the chaos.

And it's not the only one. I've imagined two more storylines on stray adventures with my dog, one for my Ghostwriter Roxy Parker, and one for the Agatha Christie Book Club.

I won't say any more than that, wouldn't want to give too much away, but I'm so excited to have renewed creative vigour and I have a vigorous pup to thank for that.

Now, if he'd just let me sit at my desk in peace, I'd actually get around to writing them...

Happy reading (and walking), everyone!

xo Christina
Posted by CALarmer at 00:40