The Real Story Behind My New Mystery THE FERRY MAN (out soon!) 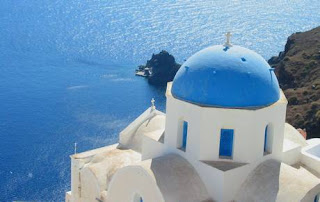 A young backpacker meets an alluring stranger on a ferry to the Greek island of Santorini. When he gets off miles from her destination, she has to make a terrifying choice. Will she jump ship with him and desert her travelling companions? Or stay safely onboard and miss what might be the love of a lifetime?
This is the story of one woman, two lives, and the consequences that lead to murder.

THE STORY BEHIND THE STORY

The year was 1991. I was in my early 20s. A wide-eyed backpacker fresh from Sydney, Australia, with an old school friend beside me and a team of American Lacrosse players we'd met up with somewhere in Europe. We were en route to Santorini, on the deck of a ferry, laughing, flirting, having fun.


Then, in the middle of the eight-hour journey, one of those US players struck up a conversation with a total stranger, another Aussie woman with an alluring smile. He was instantly smitten and before we knew what was happening, he was deserting us all and jumping ship with her on a completely different island.
Now remember: This was BEFORE mobile phones, before instant messaging and GPS. It was back in the days when you still had to book a call from a Greek post office if you wanted to phone home. It was another time and era and so his decision to abandon us for a relative stranger was a brave and potentially risky one. And yet we all laughed and waved him off as if it was just a lark.
To this day I don't know how it went with that Aussie girl and if he ever caught up with his mates again. But I do know that choice he made has haunted me ever since.
Over the years, I started to wonder, what if?


Have you ever made a risky travelling decision? If so, you'll relate to this book. It's the one I've been madly typing for the past nine months (but conjuring in my head for almost 30 years). It's a ripper of a tale and I look forward to sharing it with you very soon.
Unlike anything I have written before, it's a little less 'cozy' and a lot more 'thriller/suspense', with a dash of Gone Girl and a Sliding Doors-style twist. It's now with my editor (love ya work, Annie!) and is due out next month.
For more on this mystery, a cover-reveal, and your chance to win FREE COPIES, just keep an eye on future newsletters.
Until then, happy (safe!) reading everyone.
xo Christina
Posted by CALarmer at 23:30