It's been a big year for me on a personal level and while I only published one book in 2019—After the Ferry: A Gripping Psychological Novel (see more on that and whether you've won a copy, below)—I want to say a very big THANK YOU for all your support in 2019, and APOLOGIES for not getting my seventh Ghostwriter out in time for Christmas as planned.

I do have a pretty good (well, bad!) excuse


My eldest son finished school this year, which was whopping for him and us, but it wasn't the biggest event of 2019. As you may have seen on the news, large swathes of Australia have been burning now for months, and we have had our own battles in my immediate area, in the hinterland beyond Byron Bay. We had to evacuate our property at one point and while everything is okay for now, it has been extremely unsettling and, as you can imagine, a major distraction. But that's not the worst of it.

To date, across Australia, almost a million hectares of bushland and forest and about 1,000 homes have been destroyed, several lives have been lost as well as countless wildlife, including our precious and already endangered koalas. It really has been a horrendous start to our summer season here and, with no leadership at a political level, sadly, things remain very grim.

That's why, in 2020, I'm hoping for rain and lots of it! I'm also hoping for relief for our beautiful 'firies' - the unpaid, volunteers who leave their own homes, families and jobs to fight the fires for the rest of us. Many of them have been working for two months solid and THEY are the real heroes in all of this.

To them, I say THANK YOU,  and to you, my beloved readers, I say, here's to a calmer, cooler, happier year ahead—not so I can write more books, but so the firies can finally find time to put their singed boots up and read some!

For more on my books and other news, visit: calarmer.com 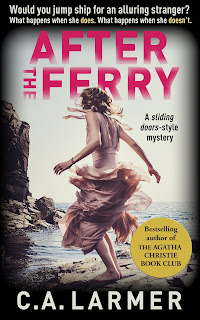 Why I Love My Latest Book

As some of you may know, I conjured the idea for this psychological thriller many decades ago, and have been itching to write it ever since.

Back in the 1990s—pre-mobile phones—I really was a young Aussie backpacker travelling with a group of guys and girls making our way on a ferry to Santorini in Greece.

During the long, sunburnt voyage, one of the guys in my group—a handsome American lacrosse player—fell head over heels for a woman from a different group. I think she was a Kiwi but I'm not 100% sure. In any case, he fell hard and literally jumped ship with her long before we got to our destination! He threw caution to the wind and deserted all of us for someone he had only just met.
There were no mobile phones back then. No way to track each other down, and I often wondered how things turned out. WAS it true love and are they now living happily in New Zealand? Did he realise his mistake and get the next ship out? Or did something untoward happen? I certainly never saw him again and have wondered about him ever since. Hence the book.

In my story, I upped the ante by turning the traveller into a naive young woman and her love interest into a dark, Greek stranger. Then I wrote two versions of what happened—a parallel story, with a startling murder thrown in.

The result is my fictional suspense/thriller AFTER THE FERRY and, while it's a lot more complex than my other books, it's also richly rewarding and those who have made it to the end agree that it's the best thing I've ever written.

Which is why I'm handing out free copies as a festive gift!

I'll be in touch shortly to offer your free ebook. For everyone else, thanks again for all your support in 2019 and happy (calm!) reading, everybody.

xo Christina
Posted by CALarmer at 18:40