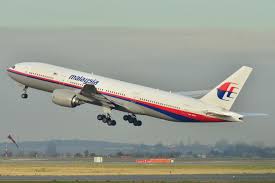 Hi guys,
I wrote this short story many years ago, and you can tell from the writing, it's no masterpiece, but it is eerily prophetic in the light of the latest news. I dedicate this to the lost souls of Malaysian Airlines 370. I hope by reprinting this I am doing them no disrespect. That is not my intention. Instead, perhaps this is one solution (albeit unlikely) to a mystery that is, as yet, unsolved. May they rest in peace, wherever they are.

A Voice From the Grave
By C.A. Larmer

A shrill sound woke Clare from a deep sleep and, as though on automatic pilot, she stretched one hand in the direction of the telephone and put it to her ear.
“Hello?” she said, her voice croaky with sleep.
“Clare?” She did not immediately recognise the caller. “Clare, it’s Patricia from the airline. Quick, switch on the telly, there’s been an awful accident!”
“Huh?”
“I’ve just heard it on the late news!”
Clare slowly registered Patricia’s words then sat up with a start. “Oh God, you don’t mean ...?”
“Oh yes. Take a look ... It’s horrendous ...” Her voice trailed off as the phone went dead.
Clare hauled herself out of bed and grappled with the TV controls until she found the 24-hour news channel.
“... and still no sign of survivors,” came an urgent voice over badly lit footage.
The camera was panning the ocean, nothing but black, lolling waves and some flotsam and jetsam to be seen. But this was not random sea debris. This was the remains of Flight 405. She sat down with a thud. As the Pacific Ocean turned into a McDonald’s advertisement, the phone startled her again.
“It’s the flight you were supposed to work, isn’t it?” asked Patricia.
“Yes.” She recalled the sudden illness that had forced her to stopover in a hotel instead. They would call it a lucky escape. “Have they determined a cause yet?”
“God no, too early for that.”
“But ... but they must have said something. Do they think it could be pilot error?”
“Oh, I hope not. Wasn’t Jason flying?”
Clare’s heart skipped a beat thinking of the pilot, Jason Goddle. He would be little more than fish food now. She dropped the phone and sprinted into the bathroom to throw up.

Two harrowing weeks passed before the airline officials came to meet with her and it was with some relief that she opened the door to them. She wanted to get this interview out of the way. While she had escaped the flight, her luggage had not, and Clare knew that would make her an instant suspect.
“Good evening, ma’am, my name is Gary Trooper,” said the older of the two men. “I’m investigating the crash of Flight 405. This is my associate, Bob Smith.” He indicated a younger man behind him. “We just need to ask you a few questions on behalf of the airline. Can we come in?”
“Of course.” She showed them into her lounge room. “Have you determined the cause of the crash, yet?”
“Yes,” he said. “It was a bomb. An amateur one, but deadly nonetheless.”
“Oh God. And do you have any idea who? Why?”
The official shook his head. “Nothing certain, yet.”
“You must feel like a very lucky woman.” It was a statement from Smith and she simply shrugged back.
“I had a lot of good friends on that flight. I’m not so lucky to have lost them.”
“And, of course, your suitcase.”
“Yes,” she said, looking away. “It was too late to get it off and now it’s lost to the ocean forever.”
“Well, not quite.” Smith dumped a large plastic bag on the coffee table. In it were a selection of her things, including some photos, jewellery and a pair of shoes. “These washed up with the debris,” he said. “You might want to take a closer look.”
She pulled the bag towards her and noticed that each item was contained in its own Ziplock bag.
“That’s how we found them,” Trooper said. “Can you tell us, Miss Harrow, why you packed your things like this?”
Clare glanced from Trooper to Smith and back again. “I’m a pedantic packer. What are you suggesting?”
“We’re just investigating all avenues.”
“You don’t honestly think I placed the bomb?” She couldn’t believe her ears. “Surely, if the bomb was in my bag, these Prada pumps would be in a million pieces by now? Besides, in case you’ve forgotten, I was due to work that flight until my stomach suddenly gave way.”
“See, now there’s the problem,” Trooper said, leaning forward to make his point. “No one actually saw you throw up. You could easily have faked your own illness to get discharged from duty but, in case you couldn’t retrieve your luggage, you packed your special items in waterproof plastic.”
“Oh this is all so ridiculous,” she spat. “If what you say is true, tell me why! Why would I want to kill 124 people?”
“You didn’t. You just had one person in mind, the pilot, Jason Goddle.”
Clare’s eyebrows shot up. “What on earth for? Jason was a dear friend, everybody loved him ...”
“Particularly you,” Trooper boomed. “We know about your affair, Clare. Jason wanted to break it off; you weren’t going to hear of it. Not without ruining him for good.”
“This is all hypothesis,” Clare said, calmly. “You have no proof of this and, well, Jason’s hardly in a position to corroborate.”
“That’s where you’re wrong.” He signaled to Smith who produced a tape recorder.
“What’s this?” she asked, her brows furrowed.
“Let’s just call it a message from the grave.” He pressed ‘Play’.
“I don’t know what to do,” came the sound of a man’s voice. Clare’s stomach lurched. It was Jason.
Another unfamiliar voice said, “What’s the problem? Just tell her it’s over.”
“That is the problem, Clare won’t hear of it. She came to see me at the hotel today, said she’d tell my wife, blow the whole thing sky high.”
Smith turned the machine off and glared at the stunned woman. “Did you know we record everything that goes on inside the cockpit? This was taken from the cockpit voice recorder about half an hour before the bomb went off. It proves you had motive as well as access to the pilot’s bag, which we now believe contained the bomb. I’d say you placed the bomb while he wasn’t looking, then faked your own illness to get off that plane.”
Trooper looked at her angrily. “Was he really worth the lives of 123 innocent people?”
Clare crumpled. “I just wanted to see him hurt, you know, the way he hurt me?” She dropped her head into her hands. “It was such a tiny explosive, I thought it would just knock the plane around a bit, tarnish his perfect bloody record. I never expected it to blow the whole lot apart ... I just wanted the world to see him for what he was ...”
Smith tossed a recent newspaper towards her. “I’d say you failed.”
As he read Clare her rights and led her away, the last thing she saw was the headline, in large, bold type:
“Nation mourns the death of loving husband and hero pilot.”