A sweet place to bump someone off

So I'm wandering through a towering, Scandinavian pine forest towards a rippling blue cove and all I can think about is murder. What a stunning place to bump someone off!


Later, while staring up at the ancient bell tower I consider hanging someone from it, or should I just lay their body strategically underneath, a reindeer grazing nearby?


I'm on the tiny island of Sandhman, part of Stockholm's archipelago and it's frightening how quickly my thoughts turn to all things murderous. Really, this Swedish island is idyllic. Serene. The very last place you would expect such violence. And yet there my mind goes. I guess it's the unexpectedness of it that's so appealing, the incongruity of murder in such a peaceful setting. I know it'd make a great plot device for a future Ghostwriter Mystery.

There's just one problem and I'm not talking about my sad, twisted mind.

It's all been done before, damn it, and by someone with a lot more authority than me. Or at least I think it has. If only I could read Swedish. 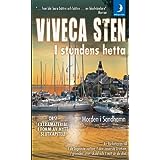 The one who came before

Swedish author Viveca Sten has been coming to Sandhamn since she was a baby. Every damn summer for decades. And she's based a bunch of crime novels on the island.

She beat me to it, and I expect she's done it much better than I could ever hope to—because she has such an intimate knowledge of the place. How could she not?

I'd be cranky with Ms Sten if I wasn't so intrigued. I long to read her novels, to see if her mind lingered on murderous thoughts at the same spots that mine did. How did she pull it off? Did she use the bell tower? How did she describe that apline forest? Was the murderer a local, the detective a ring-in like Roxy?

So many questions, so little chance of ever having them answered, unless of course I take up Swedish. You see, as far as I can tell Ms Sten has not had her books translated to English. And why should she? She's a popular Swedish author, living thousands of miles away from me.

But gee I wish she would.

For now, I can only imagine where Ms Sten's tales took her and try to give mine a different twist. Because I'm not put off one bit. I still intend to get Roxy across to Sandhamn and place her life in jeopardy somewhere in that spiky forest.

It's too serene a location to pass up.