Is ANY book better than NO book when it comes to kids? 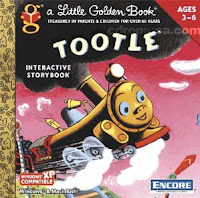 Nobody likes a smug parent, let's be frank. There's really nothing more blood-boiling than a 'back-seater' telling you how to raise your own, but I have to confess I came scarily close to morphing into one at a doctors' surgery one summer's day.
I was flicking through a trashy woman's magazine, waiting patiently for my GP to finish up with an old bloke and his worrying cough, when a man walked in with a boy who looked about 10 years of age.


After taking their seats across from me, the boy began to fidget, then twiddle his thumbs and glance about. Within minutes he was up and helping himself to one of many books that had been piled high on a bright red, plastic side table just for kids. I recognised the book instantly, it was Tootle by Gertrude Crampton, an oldie, but a cherished childhood favorite of mine. I gave him a wide smile, which he returned as he settled back into his seat.
Not so his dad.
"What're you reading that for?" the man grunted. The boy looked up from the bright, inviting pages towards his father's dark frown. "That's a baby book. You're too old for that crap."
The light in the boy's eyes instantly extinguished. He glanced at Tootle, almost as though hoping the rebellious locomotive might whisk him off into the wild meadows beyond, then shrugged, closed the book and put it back where he found it.
Then he sat down, empty-handed, and began fidgeting again. And so he remained for the next 20 minutes, doing nothing, reading nothing, staring blankly at the wall.
Never before have I wanted to cry out with such anguish as I did that balmy summer's day. Never have I felt so aggrieved for a child. I couldn't believe what I had heard.
Did a father really belittle his child for reading a book?
Okay, sure, it's a Little Golden Book, and maybe his son was capable of reading War and Peace, I don't know. And yes, the moral of the story is questionable—who cares if a little train goes off the rails from time to time?—but here's something I do know: reading anything, even a 'baby book' about an anarchic choo-choo, has to be better than reading nothing but the disappointment on your father's face.

What kind of a person does that?

Sure, it's not child abuse, not in the textbook sense, but in my book it comes pretty damn close. Books are not just a dreamy concept for chardonnay-swilling bleeding hearts or vested-interest authors like myself. Endless studies have proven that books of any kind help create smarter, happier, more socially competent human beings. A 20-year Nevada University study, for instance, found that no matter what a parent's background—rich, poor, illiterate or an Oxford graduate—those who have plenty of books in their house help boost their own child's education levels.*1

It's a fact.
Other research shows that reading to your child not only increases their brain activity, wordless picture books can enrich a toddler's language while all books can help children struggling with genuine social issues.*2
Boys in particular need an extra nudge, and I could bore you senseless with even more studies that show how far boys lag behind girls when it comes to books and reading, the gap only widening when the hormones kick in.*3
The haves and have notsWe tend to take literacy for granted in Western society and often waste time waxing lyrical about the 'right kind of book' for growing minds, yet reading of any kind can make an enormous difference to a young child. This stuff matters! A new Grattan Institute report from Australian teachers revealed that there can be as much as a six-year gap in any one classroom between students' educational levels.*4 Six years! That's staggering.
I know from my own experience, that when my eldest son started Kindergarten, his teacher, a veteran of 30 years, told me she can always spot the child who lives in a house without books. Not only were they behind on all literacy markers, some, she said, had no idea what to do with a book, which way the pages turned or what those funny scribbles were all about.
That breaks my heart, and not just because I'm a bleeding you-know-whatsie. Books aren't just educational bellwethers, they're bloody good fun! As a mother who grew weary under the piles of books my sons insisted we get through before lights out, it astounds me that some houses don't actually own one.
What do they do at bedtime?
How do they soothe a crying child?
How do they entertain, terrify, intrigue and delight?


At my place, you'll find books scattered in every room, including the kitchen and toilet, as well as stacked high in the garage, floating about in both cars, and on every digital device, because, yes, books don't even need to be of the paper variety. If your child refuses to visit the library for some freebies, try downloading a bunch of ebooks onto his iPod. You'll find some for under a buck. Call into your local charity shop, ask the empty nester living down the road. At the very least, the local school should have some. It might take a little bit of effort, but the rewards are exponential.

Something to laugh at

Books don't need to be award-winning, they don't even need to be appropriate. According to another expert, this one in children's literature at the University of Illinois, comic books are just as sophisticated as other forms of literature in providing all the same benefits.*4 It's all about providing stories in which your child can live, learn and get lost.

So the next time your child opens a Batman comic, thumbs through a surf mag, or, heaven forbid, a 'baby book', don't discourage or criticise. Be thankful they're improving their brain, having fun, and becoming better members of society. Surely that's better than blasting someone's head off on PlayStation or twiddling the thumbs doing nothing?

I never did pull that father up that day, but I did go home and make a solemn oath to the tiny little being that was nestled in my womb that summer. I swore I would offer him a wide and wonderful range of stories to read, and never complain when he chose something else entirely—even if that 'something else' was not to my liking. Then I sought out my tattered copy of Tootle and read aloud to him in the womb while his older brother nestled in happily beside us. But this time I left Tootle lolling in the meadow with his new mates. (No-one says you can't improvise!)

That unborn child is now my vivacious 11-year-old, roughly the same age as the boy in the surgery that day, and his favourite thing—off a soccer field, that is—is books. I cannot satiate his desire. His library card is chockers, his iPad overloaded, the school librarian is struggling to keep up.

Am I a smug mother? You bet I am, but I can't really take any of the credit. I give that to the likes of Gertrude Crampton and Tootle. Sure, the story's not perfect—I mean, come on, people, let the poor train play!—but who knew a steam engine with training wheels could be so powerful?

And as I watch my son get lost in the latest book of his choice (which these days centres around wimpy kids and psycho bums, it has to be said), I often wonder about the little boy in the surgery that day.

I dearly hope he managed to find his own pathway back to books before he became a father himself, with a loathing for books and a very tiny mind.