*** WARNING***
Rant to follow. Those without children or who aren't up for a lecture may want to bail now

Hey, fellow parents,  I want to get off the topic of books for a moment (although we'll come back to it, I promise) and I want to throw some questions at you, if that's okay.

Tell me, when you were a kid, did your parents insist you come inside when it got dark or late? Did they insist you eat your vegetables or brush your teeth or do your homework even when you didn't want to and your best mate never did? Did they force a bed time on you and insist you turn out your light?

What about school? Did they force you to get up at a certain hour and go to an institution that you may even have hated? Hell, none of your friends liked it either, but you went to that school, you sat through those classes, and you came home again. And they made you do it even when you were getting older, like 16 and 17 and, for some of you, 18—an adult!

But you survived, right? Not only that, you were the better for it.

In fact, thanks to all those rules, above, you were a better person all round. You were healthier and more rested, you were safer and more interesting, you were more educated and more likely to become a successful member of society.

So tell me this, then. How come you can't pay the same courtesy to your kids? How come so many of you refuse to put boundaries around the one thing that dominates every single child's life at the moment and is crushing them on a daily basis.

Yep, you know exactly what I'm talking about: Digital devices. 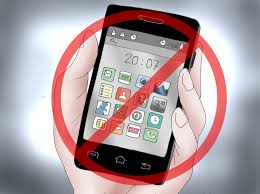 Now, before some of you freak out, let me quickly qualify: I know that some of you DO place boundaries around your child's use of devices. I know some of you do NOT advocate a 'free for all' and may even be madly nodding your head as I write this, but I also know you are in the minority and I am not talking to you. Instead I congratulate you and beg you to keep up the good fight.

No, I'm talking to those many parents who think that removing a child's devices at night or making them get off them at a certain time is either too damn hard or completely unnecessary or, hell, bordering on fascism. It's mean! All their friends are on them, they'll miss out! Besides, they hate it when you take it off them, and get very, very cranky, so you'd rather just keep the peace. It's not really hurting them, right? They seem to be okay, they're managing it fine, so why be so harsh? Get with the program, it's all just part of peer group interaction, it's today's mode of socialising, it's just the modern world, you old fuddy-duddy!

Not my world. Not anymore.

Two weeks ago, when the new Aussie school year began, my husband and I began a new ritual, too. Fearing our children were quickly becoming addicted to their iPhones, and rarely seeing them spend any time doing anything other than staring at a small screen, we were getting increasingly concerned. It wasn't just that they were wasting time on other people's creativity (because there's lots to love about the internet, but not when it's stopping them from engaging in their own creativity). Their devices were also draining them. They were clearly going on them after lights out, and waking up moody (even for moody teenagers) and becoming quickly disengaged and in trouble at school.

So we took action.

Each evening at 9:00 p.m. we now remove every single screen. Not just out of their hands, but out of their bedrooms entirely, so they spend the last hour—just one measly hour or so—before sleep reading, drawing, playing their guitars or, even better, doing absolutely nothing. We give them the space to become like the person who invented the internet in the first place. Space to think and imagine and grow.

It was just one little hour before official "lights out", but of course, they freaked out. The first night they were both very grumbly, scowling, cursing, carrying on, but by night two, the younger one began handing his gadget over happily enough. He's just 12 and hasn't had his iPhone for long. He clearly wasn't addicted.

The 15-year-old was a very different story.

Like wrenching the crack pipe out of a junkie's hands, taking my older son's iPhone and laptop has been nothing short of traumatic. At first he blatantly refused, then he railed, threw a tantrum, stormed out of the house, sat on our roof for an hour. It was hard. It was exhausting. It was emotionally draining. I felt like he had morphed into a terrible toddler again and I began to regret the whole process. But we stayed strong.

By day four—four, people!—he had settled down. He was over the worst of it. I even caught him sitting at his desk painting that evening, his iPhone untouched on his bed. And it wasn't even 9:00 p.m. Earlier he had tinkled on our piano and jumped on the trampoline. It was a big difference to his usual behaviour, staring, mesmerised by some inane antics on YouTube or swapping emojis with his mates.

I know my boys don't like having their gadgets removed, they may not even understand why we're doing it, but they're surviving and flourishing regardless. They haven't had a loss of friends, haven't missed out on any parties or conversations that really matter. They're getting more interesting though, and a hell of a lot more sleep.

Last night, my eldest said, "I feel smarter this year, I seem to be finding school easier than ever, I wonder why?"

My husband and I exchanged a small victory smile.


Yet when I talk about all of this with friends, my hubby and I are still one of the only parents in our sons' peer groups who remove their devices at night. And most of those parents are stunned that we even try. I'm a little tired of my boys telling me they are the only ones in their gang who are "punished" like this. I'm a little tired of parents being so "in awe" of my husband and I for being "so strong" or "so harsh" or "so amazing".

And to be honest, it's annoying the crap out of me, because the more of us who do this, the easier it will be to do, the less amazing it will seem. And the sooner it will become habit for all our kids, like brushing your teeth at night or eating your vegies, or getting up and going to school whether you like it or not. They will just do it because that's the rules and everybody does it.

I'm also impatient with arm-chair psychologists telling me this is just the way modern kids socialise. They're welcome to socialise via social media. I have no problem with that. I use it, too (you get this is an online blog, right?), just not all day and all night. And if all my sons' mates were forced off their gadgets at 9:00 p.m. they wouldn't miss out on a thing because nobody else would be on it, right? (And remember: we socialised by phone but that didn't mean we were allowed to call our mates any damn time we liked! When did socialising become more important than sleep and school and sanity?)

Your kids do not want you to confiscate their devices. That does not mean you shouldn't.


Curbing your child's use of devices is not just smart, it's safe, it's healthy and it's VITAL if you want them to actually develop into someone a little like you or the people you admire—independent, creative, interesting, healthy, safe, happy, well adjusted...

I am so glad I grew up without screens. There wasn't even television in Papua New Guinea where I was born. If there was, I'm not sure I would be writing books right now, I just don't know. I do not know if I would have developed my imagination as I have, I don't know if I would have had time to just stare and be so extraordinarily bored I had to come up with my own entertainment. Stories.

I do know this, though: As an adult, I would not have written eleven books if I spent all my downtime staring at my iPad, which is my default device and which I, too, feel strongly drawn to. I know I have to switch off to switch into my creativity, or nothing gets done, and so I force myself to. So why aren't we forcing that on our kids, too? Why aren't we allowing them the same courtesy?

Because at the end of the day, you're actually doing your child a disservice by being so lenient. It's lazy parenting to say, "They'll be right, they'll be fine" because, well, how do you know that? Maybe yours will.

But maybe they won't.

And maybe your teeth would not have rotted if your parents hadn't forced you to brush them twice a day and maybe you wouldn't have been assaulted if you'd been allowed to stay out after dark, but aren't you glad your parents didn't risk it and made you do those things anyway?

Be bold, be brave!

It's hard to wrench those devices out of your kid's hands, but I promise you this: they will thank you for it later. Because there is no way it can hurt. No way in a lifetime.

Don't believe me? I'll leave you with a quote from a beautiful young woman who stayed with us recently. She's now 21, the daughter of old friends. She's studying at university and playing in a band and has a lovely boyfriend and a healthy body and a fantastic attitude to life.

Over dinner one night while she was here, she said, "Mum and Dad used to make me put my device outside of my room at night. Gee I used to hate it. But in retrospect I 'm so glad they did."

My kids are going to be glad too, they just might not like me for a little while. I think it'll be worth it.

xo Christina
Posted by CALarmer at 19:03