What authors did before Facebook (yes, Agatha, I'm looking at you)

There's one mystery that has always intrigued and infuriated mystery buffs in equal measure, and that is the real-life disappearance of the Queen of Mysteries herself, Agatha Christie, back in 1926. Until recently, however, I gave it very little thought, and certainly gave no credence to the cynical suggestion that it was all just a public relations exercise.
As if Dame Christie would be so crass! 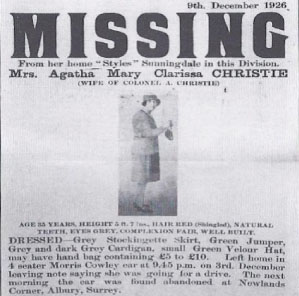 Today, however, I'm beginning to wonder. As a mystery writer myself—and, yes, the comparison is a little cheeky, but humour me if you will—I am constantly looking for fresh and dynamic ways to market my books. I tweet and I blog and I sign up for mega Facebook events, but of course Ms Christie had no such tools at her disposal. She had some broadsheet newspapers and the odd book tour, although I'm yet to find any evidence she ever did one.

So did Ms Christie utilise her wicked intellect and ability to weave an engrossing mystery around herself instead?

If the astonishing true story is unfamiliar to you, allow me to quickly recap: On December 3, 1926, following an alleged marital tiff between Agatha and her philandering hubby Archie, the former disappeared, leaving an obscure letter and an abandoned car at an old quarry. We know now that Agatha quietly checked into a spa hotel in Harrogate under an assumed name (the same surname as Archie's mistress, just to thicken the plot) and remained there, unrecognised, for another ten days while half of England were out searching for her and the other half held their breath.
Lakes were drained, lofty rewards were offered, and an extraordinary 15,000 volunteers turned out to scour the countryside searching for clues a la Miss Marple. Even celebrity authors Arthur Conan Doyle and Dorothy L Sayers got into the spirit. Then, on December 14, Aggie was finally discovered, still ensconced at the Swan Hydropathic Hotel, seemingly oblivious to the hysteria going on outside. She was promptly whisked away by her bemused looking husband who was no doubt wondering how long he could viably wait before losing her for good next time.*
Forget whodunit, to this day it has always been a classic whydunit? Why, oh why, did Agatha disappear?
The motives behind her vanishing are as complex as a Poirot novel. Was she suffering a case of amnesia as was conveniently suggested at the time (a pathetic plot device if ever there was one)? Was she in a stress-induced psychogenic trance, the latest new-fad theory? Was it revenge against Archie who was supposedly philandering with his mistress the weekend she vanished? Was it deep, dark depression or, as salaciously portrayed in a 1979 movie starring Vanessa Redgrave, a foiled suicide plot?
Or was it, as the cynics suggested and I am beginning to wonder, the greatest public relations stunt in literary history?

We always think of Agatha Christie as breathtakingly successful—to date she's sold around 2 billion books, apparently, making her the highest-selling novelist in the history of the universe—but none of her 80-plus detective novels and countless celebrity-studded plays and films ever gained as much press as that one single act.
It may be largely forgotten today but back then Agatha's disappearance was a non-stop talking point. It was splashed across newspapers throughout the United Kingdom and even made the front page of The New York Times. Salman Rushdie had to attract a fatwa to get that kind of exposure, and Jeffrey Archer had to do some serious jail time.
I recall from my own research that Agatha was struggling with her latest (and least favorite) book, The Mystery of the Blue Train, at the time of her disappearance, uncharacteristic for someone who usually wrote at a Patterson-style pace. Perhaps she decided, as I am prone to do, to stop writing for a bit and start pouring her energy into promotion, a kind of writer's block remedy if you will. And what better way to promote your work than to pull a marketing stunt like that?!
While there was plenty of backlash after Ms Christie was discovered alive and in shockingly good health (a ghastlier ending was the least she could have provided), I can't help thinking of the old adage, about any publicity... You know how it goes.

Would Ms Christie really have gone to such lengths to throw a spotlight on her novels? Would any of us?

It's shocking how much publicity artists (pollies, businesses, celebrities, wannabes...) can drum up in a matter of minutes today, or how much scandal we can create with just 140 characters or a few strategically posed selfies (if only the Kardashians had something decent to say).
I'm taking part in an upcoming Facebook event with 40 other mystery writers from across the globe. We're answering questions, showcasing our books, and reaching a collective audience of more than 250,000 mystery readers--and all I have to do is sit at my keyboard for one measly hour.
Who needs to stage a week-long disappearance when you've got Facebook, Twitter and 24-hour news feeds? Yet of course Agatha Christie had none of that. Apart from the odd review in the local rag, very few punters even knew what the best-selling author looked like. It's no wonder she managed to hide in plain sight for so long.
Today, J.K. Rowling wouldn't get as far as the bus stop without being unmasked, filmed and splashed across YouTube.

So was Ms Christie's vanishing really just a PR stunt?

We don't know, of course we don't. Agatha never spoke of it publicly and made no mention of it in her autobiography, much to my chagrin. Sadly for the mystery boffins amongst us, Dame Christie's extraordinary mystery died with her.
Yet isn't that what makes it so extraordinary? Or, in the eyes of cynics like myself, a masterstroke of pure marketing genius?
Now, where could I disappear to I wonder...
Happy (mysterious) reading everyone!
xo Christina

*And in case you're wondering, Archie waited just long enough. The Christies were quietly divorced in 1928. The press were not invited.