My tribute to a True Crime trailblazer, Ann Rule

Hi guys,
I wrote this post last September, after belatedly discovering the tremendous True Crime author Ann Rule, author of more than 30 books. With news overnight that Ms Rule has passed away, aged 83, I think of her again and hope she can finally rest in peace...

The Queen of True Crime

I seem to have developed the True Crime bug, big time, and have found myself creeped out for days now reading The Stranger Beside Me by Ann Rule (Pocket Books; reprint 2008).

This book is considered the blueprint for true crime, the bible for all true crime writers, and yet when Ann Rule wrote it she was a total novice. While she had once been a cop and had written extensively on crime for various detective magazines, she had never written a book before.

But that's not the stunning part about it.
What is truly incredible about this story—and why I guess it broke all the rules and became the template for both true crime and immersion writing—is that Rule had no idea, as she embarked on the book, that she not only knew the murderer, she was his friend.

Soon after being commissioned to write about a dreadful series of murders across America involving scores of beautiful young women who were brutally attacked, she came to realise that the leading suspect in the cases, indeed the only suspect, was a man she had befriended while working in a crisis centre. A man she genuinely liked!

It was, of course, the infamous Ted Bundy, a name that still sends shivers down women's spines 40 years later.

Bundy was a monster like no other.
He confessed (albeit indirectly) to more than 35 murders, each one horrendously degrading, the kind that gives you nightmares. And Rule was on his speed dial.

Incredible stuff. Even more incredibly, Rule didn't hang up the phone and run (as I probably would). She didn't baulk at writing the book once Bundy was arrested, nor did she hesitate to remain in contact with that monster throughout his incarceration, taking his calls, returning his letters and even sending regular checks to help pay for his smokes in jail.

I don't believe she did that for the sake of the book.
Not at all. It was not a marketing ploy. Judging from the book, she genuinely liked this man and wasn't afraid to admit it! She couldn't quite believe at first that he could do such monstrous things. When she finally had to accept this truth, she still felt a certan empathy for him which may seem bizarre to the average person, but which is very brave and honest of her to admit.

This book does what I think Virginia Peters tries to accomplish in her newly released Have You Seen Simone? (Penguin; 2014), see earlier blogs, yet fails at. This book takes us through the nitty gritty of a true crime (or 35 of them, and it's gruelling stuff!) while also showing us an incredible friendship and a first-hand insight into a murderer's mind.

She balances her friendship and the truth with such applomb. It really is an incredible feat and has been worth every jittery moment of reading it.

I have not enjoyed the book—how could anyone enjoy such horror?—but I did find it gripping, un-put-downable, and I was mesmerised by the words of an innocent writer caught in the middle. Unlike Peters, this really is as much about Rule as it is about Bundy. Yet we never feel that Rule believes that. She never takes over the story or makes it about herself. She is just there, stuck in the middle, and we are stuck right alongside her.

It's no wonder, as Rule says at the start of this reprint, people still contact her about the book all these decades later. She has gone on to write scores of other books, but this is the one that haunts all who come across it. And still haunts her.

Happy (less creepy!) reading everyone.
xo Christina
Posted by CALarmer at 19:24 No comments: 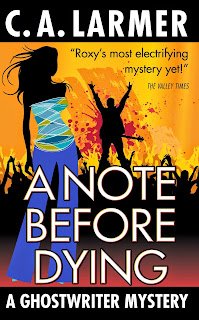 Once again I am offering my beloved readers the chance to score a FREE copy of ANY Ghostwriter Mystery ebook of their chooisng (or any of my other ebooks if you've read them all).

All you have to do is pop a quick review of my latest Ghostwriter Mystery A NOTE BEFORE DYING on Amazon. I'll spot your review (good or bad) and get in touch.

That's right. Your review doesn't have to be long (a simple sentence will do) and it doesn't even have to be positive—although I do hope you love it as much as the other reviewers did.

Get in quick. This offer remains open until my generosity dries up... (in a week or so).

Thank you and happy reading!

Posted by CALarmer at 21:26 No comments:

And the winner of the Worst Book Ever Written... (drum roll please)

Before I begin my spat, let me say I am not normally a nasty person. I'm usually the only one at Book Club gatherings defending the poor writer as people who have never written a single chapter (let alone an entire book) tear shreds off perfectly capable writers.

It's hard to pen books, they're difficult creatures to pull off, so my sympathies usually lie with the author.

But not this time. 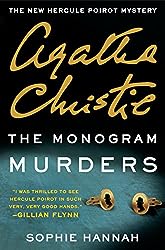 This time I just can't help myself. Today I have to go on record, as the author of The Agatha Christie Book Club, and a life-time fan of The Dame, and say... What the hell was Sophie Hannah thinking?! (Or the publishers Harper Collins?!)

Have you guessed which book made me so irate I had to chuck it across my bedroom and toss and turn all night?

That's eight hours of my life I can never claw back.

Why it was such a disaster


Where, dear Agatha, do I start? I know that anyone attempting to pull off a Poirot as you did so beautifully so many times, is a bloody brave person and (maybe, just maybe) deserving of some kudos. But Ms Hannah deserves very little. She makes an utter mockery of our favourite Belgian detective. She's turned him into a charicature of himself. A grotesque parody.

Too many 'Mon ami's' and 'little grey cells'. It feels as though he spurts French every second sentence, something he never did in the original books. You want to scream, 'Yes, Sophie, we get it. He speaks French!!" "Okay, take it down a notch, Soph', we know Poirot likes to use his brain!" It has all the subtlty of a sledgehammer on a glass egg.

A plot to kill (the author) for


Then there is the ridiculously complicated plot. I mean, 'complicated' is too kind a word, it's a gross understatement. Sure, Dame Christie could weave an intricate puzzle, but Hannah has got herself—and her readers—in knots. It's a mess. A shambles. A joke.

The 'big reveal' to the assembled audience— a classic Christie trick— drags on and on and on over about 30 pages. Or at least that's how it feels. I mean, come ON already! Any plot that needs that amount of explaining is no plot worth investing in.


Told in the first-person voice of a 'Scotland Yard friend' of Poirot's, the storyteller, detective Edward Catchpool, is about as believable as Santa Claus. Are we really to accept that the man in charge of investigating three murders at the prestigious Bloxham Hotel is so overwhelmed by dead bodies that:
1) he'd land a job at Scotland Yard in the first place?
2) he'd desert the crime scene to return to his fireplace and do crossword puzzles to soothe his nerves?

Sophie, I'm not sure if you realise what you've written. He LEFT the crime scene unattended. He freaks out when he sees dead bodies. He can't actually look at them straight.

THIS is the guy you've charged with investigating three murders on behalf of London's finest constabulary?


There are so many other ways to loathe this book, but I'll take a deep breath and let it go. I know that my anger and criticism is partly due to the outrage I feel that ANYONE has attempted to write under the guise of the Great Agatha Christie (I mean, Sophie's name is right there beside Agatha's on the cover for gawd sake! Before it on my cover, in fact!!)

When I wrote The Agatha Christie Book Club, I made sure it was clearly a separate entity. I did not pretend to be writing a Christie novel. I set it in modern Australia around a bumbling group of book lovers. It was never intended to be an imitation, and that's where you went wrong Ms Hannah. You tried too hard and failed abysmally.

Now you can see, dear readers, why I had to throw it across the room and go, "Arrrrrrgghh!!!!!!"

But, hey, maybe I'm being unjust. Maybe you'd like to read the book and decide for yourself. Personally I'd suggest you put your pennies in a real Christie classic, but I'll leave that up to you.

In the meantime, happy reading everyone (but might I suggest another book?)...

Posted by CALarmer at 22:32 No comments:

And then I chucked the book across the room...

The moment I read the words 'The End' I screamed with frustration and threw the book across my bed and watched it land with an almighty thud against the wooden floorboards.

"Are you okay, babe?" asked my husband, looking up from a book on Napoleon.
"No I am not okay!" I wailed. "That book was the worst book I think I have ever read. And I have read a lot of books in my time."
"You've written a few, too," the hubby suggested, now cowering behind Napoleon.
"Exactly, so I should be a little less harsh than your average reviewer, but... arrrrgggh!"
"You didn't like it?"
I glared at him, rolled over, and tried to block it from my mind as I attempted to fall asleep. It was like blocking out the sun in the Sahara.

So what book got me so riled up and kept me tossing and turning all night?


I'd love to tell you, really I would, but I think I need another 24 hours to take a deep breath, get some perspective, and try to give the author the benefit of the doubt. I've received harsh reviews in my time and I don't want to give one unfairly. But just between you and me, I can't see my anger diminishing anytime soon. I have a feeling my critique will only grow crueller by this time tomorrow.

Until then, allow me to give you some clues to determine which book—of all the books in all the world—has made me so cranky. I wonder if you can work it out. If you do think you know the answer, jot a comment below. If you're right, you'll score yourself a copy of one of my mystery novels.* One I hope won't end up strewn across the floor in your bedroom.

Clue 1: They say imitation is the greatest form of flattery but this dame would not be impressed.

Clue 4: What's old is new, except when it's so bad it should never have existed.

Happy guessing everyone and may you have a more peaceful reading session in your bed tonight!

*Offer applies to the first 3 respondents
Posted by CALarmer at 01:12 No comments: