5-Minute Murder Mystery (My Free Gift To You!)

Hello and welcome to the first of my free quick reads. Every few weeks I’ll send you a short story with a twist. From mystery to romance, they’re a simple way to thank you for your support and keep the silly season light. Happy reading, everyone! 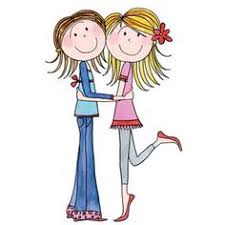 My sister has always been deemed more beautiful, and I can’t understand why. We’re identical twins. We’re supposed to look the same.
Yet for some reason men find her more attractive. Hell, everyone’s more attracted to Kara—old women, toddlers, even the Alsatian next door gallops across, tail wagging like a windsock when my ‘better half’ comes around. He offers me little more than bare teeth, and it bugs me.
Or, at least, it did until a few months ago, when Kara showed up dead.
They say a handsome young lad found her body. That’d be right. He alerted the police, they called in the fire brigade who, in turn, called in the Search and Rescue squad. Lots of handsome lads then, scurrying about. She was hard to get to, apparently, stuck in a tree, halfway down a cliff. Just dangling there, like a dripping carcass in a butcher’s shop window. For all to see.
The irony of it hit me. Kara wasn’t much of a show pony, never ostentatious, no siree. Her image was what they called ‘sophisticated’. Subtle make-up, stylish shoes. I gather she spent all she earned at that over-paid PR job on her high-end pumps. I’ve got them all now, of course, but they aren’t taking me where I thought they would.
I’m more your ‘cheap and cheerful’ type anyway—bright opshop clothes and sparkly chemist cosmetics, thick blonde highlights I get from a box. So kill me, I’m frugal. I have to DIY. You can blame all the bitchy bosses who keep ‘letting me go’, like they’re doing me a favour with their high standards and disappointed smiles.
Bit like the guys I’ve tried to date.
I had a boyfriend once, quite a passionate character. Until he met her. Of course Kara would not be tempted by someone so ordinary, but she might as well have. He never looked at me the same way again. I mean, we continued going out for a bit, but the fire had been doused, I could see it in his cold, wet eyes. Eventually he left me dangling, like I knew he would.
Dangling. It’s a funny word, don’t you think? Ugly. Humiliating. Out of control.
Kara was never normally out of control. She spoke well, she made friends easily, she drank just enough, never put on weight. She was School Captain and University President. Of course she was! She had been in love, but she never fell there like the rest of us. She sauntered up to it instead, opening the door for it, offering it a seat. And she always left them, a few expected tears, and happiness again.
“I love being single,” she told me once. “I love being on my own.” I’d noticed. Apart from our eight months wedged together early in the piece, we’d never been close. I smirk at the thought of poor, classy Kara stuck in the slimy environs of our mother’s womb, her limbs entangled with mine, unable to get away. No wonder we were premature—she led the charge, desperate to make her escape.
Last holidays Kara got away from me for good. She was pushed from a cliff. Then she really was all alone. And now, in death, as she lies rotting beneath the worm-infested soil, she rests all alone. Except for the constant stream of visitors, of course. Mum can’t bring herself to leave Kara’s grave. Has practically set up a camp site. Old boyfriends have driven miles to pay their last respects, weeping over her headstone, leaving perfectly healthy roses to wilt without water and die. And I watch this all from a distance, disbelieving and dismayed.
I’m still here, guys! The other one. Give me a second of your time, hand the flowers over. Look at me!
One man has complied. A lovely policeman by the name of Jones. Talked to me a lot, asked all sorts of questions, mostly about me. I liked that. It was refreshing. Revealing, too. He discovered that I did it. He locked me up and threw away the key.
It’s not so bad in here. I have a cell-mate called Sharon, and she’s not going anywhere.
~~~~~~
Posted by CALarmer at 20:02 No comments: 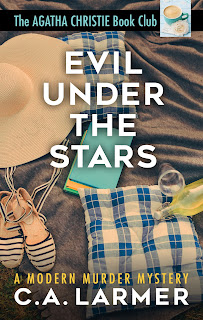 A dead body lying on a blanket… Sound familiar? (This one's for true Agatha aficionados)

In what will likely be my last Agatha Christie Book Club sale this year, I've discounted my third and newest book club adventure, Evil Under The Stars, down from $3.99 to just 99c for the eBook.
The biggest of all three adventures, that's a lot of bang for your buck, folks—although in this case, it's more a quiet suffocation in a park full of people, including our book club friends, who never heard a thing.
Find out what happens, how they managed to miss the murder, and what they do to redeem themselves and solve an impossible crime. This one's for TRUE Agatha Christie fans. While my book is a very modern mystery, there are some sneaky little clues from the original book that true Christie aficionados just might spot. Test your own prowess against mine!
For more info and retailer links, read on…
Evil Under The Stars: Agatha Christie Book Club 3
The champagne is flowing, the movie is showing, and a killer is lurking just blankets away… When the Agatha Christie Book Club reunite to watch Evil Under The Sun at a moonlight cinema, they quickly find themselves face-to-face with evil under a star-lit sky.

A woman has been strangled in a public park, with hundreds of witnesses and not a suspect in sight. How did no one see the killer lurking? How did no one hear the victim scream? And how could the gang have been lounging just metres away and missed the whole event?

When local detectives hit a brick wall, the book club do what they do best, channelling their inner-Miss Marple to help out. What eventuates is a true a battle of wits between our amateur sleuths and the Homicide Squad, with newcomer Detective Inspector Liam Jackson caught firmly in the middle.

From the author of the #1 best-selling Agatha Christie Book Club, this one’s for true Christie aficionados looking for a contemporary twist on the classic whodunit. 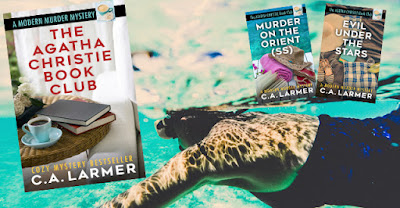 Posted by CALarmer at 23:36 No comments: