CHRISTINA (C.A.) LARMER wrote her first novel at the age of 13, and has been telling tall tales ever since. She now has 11 murder mysteries, an adult fiction novel, an adolescent novel and film script to her name as well as numerous published short stories.
For free samples of all the books, click here.
For more info: christina@calarmer.com

• Do Not Go Alone:  Twentysomething party girl Maisie should not be dead. Her party's still pumping and she's missing all the fun. Can you help her solve her own murder before the creepy dead people convince her to cross? To read an excerpt click here.
To purchase @Amazon @Apple @Nook @kobo 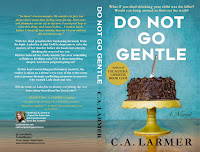 • Do Not Go Gentle: In this sometimes hilarious, sometimes heart-wrenching posthumous mystery, single mum Lulu implores the reader to help solve her murder before the granny-beckoning tunnel swallows her away. Did Lulu's beloved boy really stab her as she fears, or is there something even more disturbing
going on? For an excerpt click here.

• Murder on the Orient (SS): The Agatha Christie Book Club 2: When the book club friends take a luxury cruise on a replica steamship called the Orient, they expect little more than a voyage through time. Instead, they get a mystery that would leave Hercule Poirot scratching his egg-shaped head. Excerpt here.

• The Agatha Christie Book Club (crime fiction): Avid Agatha Christie fans join up to start a new book club but within weeks find themselves embroiled in a real-life murder mystery. They turn to the Queen of Crime herself to help solve the mystery! Excerpt here.

• Killer Twist (Ghostwriter Mystery #1): No one bats an eyelid when a bag lady washes up in a Sydney bay sans five fingers and dressed in designer couture; nor is anyone perturbed when socialite Beatrice Musgrave plunges to her death soon after. No one, that is, except ghostwriter Roxy Parker. She’s been writing Beattie’s 'autobiography' and has just stumbled on a secret that’s worth killing for... (now available on Amazon and Smashwords)
Excerpt here.

• A Plot to Die For (Ghostwriter Mystery #2): Roxy Parker thinks she's heading for a cushy writing job at a luxury island resort, what she finds is a dead employer, a suspicious collection of guests and a murderer on the loose... (now available Amazon and Smashwords)

• Last Writes (Ghostwriter Mystery #3): Roxy is back, and this time it's personal. Someone is killing Australia's top writers and the evidence points firmly at Roxy's agent, Oliver. But she’s not convinced. With the help of sexy crime writer David Lone, Roxy tries to hunt down the killer before she becomes the hunted—little does she know, a ghostwriter is next on the hit list! Will this be Roxy's last writes?


• Dying Words (Ghostwriter Mystery #4): When a dying man utters Roxy Parker's name with his final, gasping breath, the gutsy ghostwriter is thrown into the middle of her most baffling—and brutal—murder mystery yet. Why would a man Roxy barely knows call out her name on his deathbed? What did he give her that holds the key to his murder, and the murder of two friends? And is it linked to a mysterious burglar who is hot on Roxy’s trail?

• Words Can Kill (Ghostwriter Mystery #5): Max Farrell’s flatmate has just shown up dead in their Berlin unit and the hunky photographer has vanished, last spotted at a Swiss resort, a perky blonde by his side. Has Roxy Parker’s boyfriend run off with another woman or is his life on the line? Packing her bags and swallowing her pride, the ghostwriter must follow the clues to find her true love, while buckling up for the ride of her life!

• A Note Before Dying (Ghostwriter Mystery #6): When rock legend Jed Moody is electrocuted while strutting his stuff on stage, he’s lucky his biggest fan Roxy Parker is in the crowd. The Ghostwriter may be there to write his life story but now she wants to know who snuffed it out and why. Could it be a string of lovers, his long-suffering wife, embittered band members or the sexy sparkie with the chip on his shoulder and the soft spot for Roxy?

• An Island Lost (adult fiction): Sipping coffee in a NY café, Vilia is not surprised to hear that her estranged mother has died but she is startled to learn she now owns a small island on the tip of Papua New Guinea, and it's there that her father disappeared 30 years ago. From bustling New York city to remotest PNG this is a journey of discovery, of growing up and of plunging into life. (available Amazon and Smashwords)